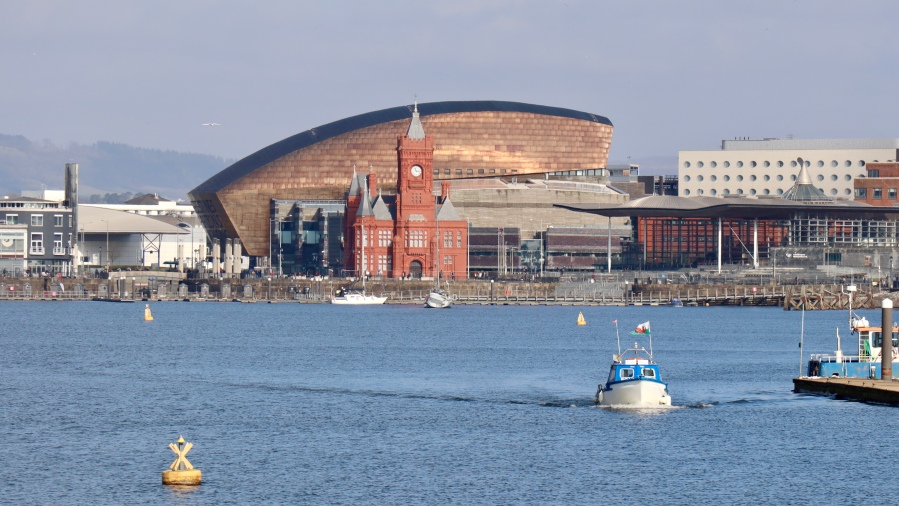 This walk starts near to Wales Millennium Centre, at the heart of Cardiff Bay. This area was once a major docks and trading centre, exporting vast quantities of coal from South Wales around the world. The docklands, known locally as ‘Tiger Bay’, was once a grimy industrial area. In recent decades it has been transformed since the construction of a barrage and is now an impressive waterfront development which retains elements of its Victorian heritage alongside smart modern buildings.

We start with a wander around the ‘Roald Dahl Plass’ open space, named after the popular children’s author, born in Cardiff. There’s a mix of the old and the modern, as a restored Victorian terrace, home to the Eli Jenkins Pub, looks across to a modern metallic sculpture.

The ‘Water Tower’ stands at approximately 70 feet high and when working has a constant stream of water flowing down its surface.

The copper clad dome of the Wales Millennium Centre is an impressive sight with huge lettering etched on the facade ‘In these stones horizons sing’. The outer sides of the building are faced with beautiful Welsh slate, the architect taking inspiration from the cliffs along the Glamorgan Heritage Coast to recreate the impression of layers of rock strata.

Walking towards the waterfront, to the right is Mermaid Quay with restaurants and bars, while to the left the coast path route continues around the waterfront. There are 3 landmark buildings along the way. The marvellous gothic style terracotta brick Pierhead building; the modern Senedd, home of the Welsh Government; and the historic Norwegian Church, now an arts centre.

Adding some interest around the bay are numerous public art sculptures. Notable ones are a beautiful and stunning designed memorial to Merchant seafarers lost during World War 2, and another ‘From Pit to Port’ to acknowledge the importance of the Welsh coal industry to the docks.

The walk continues around the waterfront, along the roadway which crosses the Cardiff Bay Barrage. The lock gates, walls and surfaces appear to have random lines of yellow paint, however if you stand in a particular spot at the right time when the lock gates are operating, you’ll see the lines match up to form 3 ovals. This is a public artwork titled ‘3 Ellipses For 3 Locks’. The photo below taken just after the barrage lock gates closed, almost but not quite, captures the fully lined up effect.

Once across the barrage, the route turns right, passing The Custom House, an impressive grand Victorian era building restored to its former glory in recent years and is now a highly rated restaurant.

At the top of the hill, the path heads along residential streets until reaching a viewpoint at Penarth Head Park. There’s a mosaic of the Wales Coast Path logo and sweeping views over the Bristol Channel and coastline of the walk ahead towards Lavernock Point.

A lane leads downhill and joins The Esplanade, which runs the length of Penarth’s seafront. It’s worthwhile taking the time to view the magnificent restored Penarth Pier, built in 1894. It brought back childhood memories of summer visits many years ago, buying an ice cream at the kiosk and going to the end of the pier to watch local anglers cast fishing lines to the murky waters of the incoming tide.

At the end of The Esplanade the path continues uphill along the roadside then leads through a wide parkland which is a very popular spot, with lots of people walking the area and families enjoying the park. At the end of the open space a rough stony and muddy track continues but is flanked by hedgerows for the most part, so the coastal views are somewhat limited on the way towards Lavernock Point.

At the end of the track, the route joins a road alongside the pretty St. Lawrence Church at Lavernock Point. There’s a little bit of history associated with this place, as in 1897 the famous radio pioneer and inventor Guglielmo Marconi, set up the first ever transmission of radio messages over sea by morse code. The event is commemorated with a plaque on the church wall.

The path goes through Lavernock Nature Reserve, an area of rich wildflower meadows and woodlands seen at their best during spring and summer. The path through the reserve and onwards were very boggy in parts as bad storms earlier that week had left the ground waterlogged. Lavernock fort, an historic military site, was disappointing as the area was very overgrown and an information board was in very poor condition. From Lavernock the downhill walk wasn’t easy, due to the slippery conditions on the very muddy path. At the foot of the hill, a grassy open area provides a pleasant viewpoint over the beach at St. Mary’s Well Bay.

The beach is in the ownership of The Bay Caravan Park, and as there’s no safe access from either side of the bay, the official route heads through woodland then around a couple of fields.

So, after walking ankle deep across a couple of swamp like fields, we eventually made our way in mud caked boots to dry land on the road at the other side of the site. The road leads downhill to the popular local pub ‘The Captain’s Wife’ at Beach Road, Swanbridge. It’s a nice place for a rest stop with a beer garden overlooking Sully Island.

Back on our way, the path runs along playing fields at Sully before a rough track leads along the top of a bank at the back of the shingle and rocky beach of Sully Bay.

At the west side of the bay before reaching Hayes Point, the path heads inland then along a road into Sully Village. The official Wales Coast Path continues westwards from here, along busy highways and industrial roads to Cadoxton and Barry Docks. As was the case for part of the route on the east side of Cardiff, some sections through busy urban areas hold very little appeal in terms of coast walking. So we finished this walk at Sully Church, a convenient place to catch the no.94 Cardiff Bus for a return to the city centre.