We ventured to Ceredigion, West Wales, for our first coast path walk outside of Pembrokeshire. Ceredigion is Pembrokeshire’s northern neighbour and the county boundary is the estuary of the River Teifi.

We stayed at The Gwbert Hotel in the coastal hamlet of Gwbert-on-Sea, three miles north of Cardigan. The hotel is located directly on the Wales Coast Path, an ideal base for walks both to the north and south. It has a smart restaurant where we enjoyed some nice meals and relaxed with a drink in the bar on returning after a day out walking the coast path.

This walk followed the Wales Coast Path south to Cardigan Town, over the town bridge at the River Teifi then across countryside to reach the small village of St. Dogmael’s in Pembrokeshire. It’s a 6 mile walk, ‘point to point’.

We set out on a bright, crisp late February morning with the weather forecast for an unseasonably warm and sunny day. Perfect conditions for a coast and countryside ramble.

We joined the coast path directly opposite the hotel, walking along the top of fields which gently slope away towards the coast with a splendid view towards North Pembrokeshire.

A car park viewpoint provides a great outlook across the bay. Apparently this is a good place from which to spot bottlenose dolphins but unfortunately we didn’t see any when we were there. Although there was some short lived excitement provided by a family as almost immediately on them parking up, the young children claimed they had seen a dolphin. Their parents, using binoculars, scanned the bay intensely but with nothing to be seen told the kids they were mistaken. They didn’t take this too well and were still adamantly claiming “but it was a dolphin!” as their parents bundled them into the car to depart!

It’s a great place to watch the sea from here as continous series of wide, breaking waves flow up the estuary creating whitecaps with plenty of sea spray effect.

The path continues downhill on a pavement alongside the main road and for a couple of hundred metres there’s no view of the coast or much else. A way-marker post points the way to a narrow track which emerges at an area of dune grass where there’s a picturesque coastal scene. 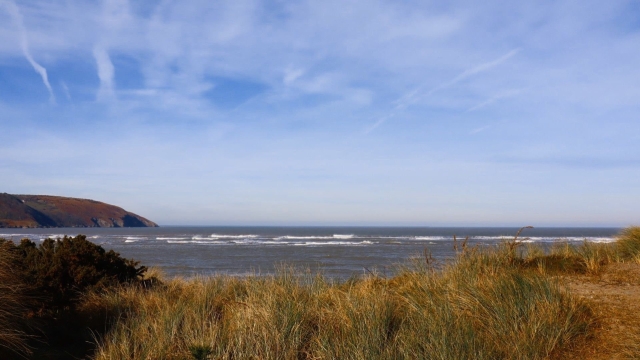 We followed the coast path around a holiday caravan park to a shingle bank at the waters edge of the estuary. Along the shoreline near a sailing club boat yard was a relaxing walk, as only the sounds of birds and a few boats gently bobbing about on the water could be heard.

We walked up a slipway and joined the pavement along the main road, following the course of the estuary as it meanders south. There’s a marsh and reed bed at the bend, with the reeds swaying and the wide calm water of the estuary it’s a pleasant setting for a scenic photo. The path heads away from the highway past a boat yard and into the countryside flanking the densely wooded bank of the River Teifi estuary.

This section was a really pleasant countryside walk and there was a chorus of birdsong from the hedgerows as we walked across numerous farm fields. We reached one field where there was a great view of the wide estuary and out to the bay.

The track descends gradually through fields and eventually brings us alongside the bank of the River Teifi and to the Quayside in Cardigan.

There was a lighthearted moment as we met a swan that had strayed onshore and was strutting along the footway, providing some amusement for a few locals. We wondered if he was walking the Coast path too.

We stopped off for drinks at a quirky, smart cafe, The Fisherman’s Rest. It’s an old wharf building on the riverfront and was a nice place to enjoy a drink and cake before we continued on our way.

St. Dogmael’s is a couple of miles further south on the other side of the River Teifi. We passed the recently restored Cardigan Castle  crossed the footbridge next to Cardigan’s old stone arched bridge and followed the coast path route to a green lane leading uphill into countryside and more fields.

Our boots got plastered on this section as we hiked across a few very muddy fields. We watched some buzzards from here as they soared and circled in the clear sky overhead. We then walked downhill to a footbridge in a wooded dell and from here it was an easy pleasant walk down into the village.

St, Dogmael’s takes its name from a 6th century Celtic saint, reputedly a cousin of St. David. A carved sculpture of the Saint stands next to a millpond and nearby are the ruins of a once substantial and important Abbey established here in 1120 A.D.

After a peaceful wander around the abbey grounds and ruins we then walked to St. Dogmael’s main street and through to the village green which overlooks a stretch of the River Teifi.

An information board here drew our attention to an interesting feature nearby. Set in a hollow down on the riverbank sits a massive Pembrokeshire bluestone, a type of stone most famous for their use at Stonehenge. This one’s a peculiar shape and positioned in a stonewalled cavity, it resembles a serpent’s head emerging from it’s lair!

The stone is known in more recent times as the Blessing Stone, so called because from here the Abbey monks would bless the fishing boats launching on the river. But it’s original name from earlier Celtic times is the ‘Answer Stone’ or ’Carreg Ateb’ in Welsh. The stone is in an unusual place and since our visit we have learned that archaeologists speculate on why the ancient celts placed it here, perhaps over 4000 years ago, with suggestions it may originally have formed a capstone of an ancient burial chamber.

So while there’s mystery about the stone’s original purpose, there’s some ancient magic here & the reason it’s known as the Answer Stone. When you stand at the stone and call out across the river, you get a pitch perfect echo return from the opposite bank. It’s an intriguing feature at this exact spot and provides some fun as we shout out and our echoes rebound from across the river.

We walked on through the village along Poppit Road, past The Ferry Inn pub and reached an open space on the riverside with a decorative slate pillar. This is the official start / end Point of the 186 mile route of the Pembrokeshire Coast Path National Trail.

This is as far as we go on this walk and for a good reason. The next time we’ll be here will be walking from the opposite direction to complete the entire Pembrokeshire Coast Path, at some future date. It’s a lovely riverside setting and over the other side of the river are the countryside fields we had walked across earlier in the day.

It had been a fine day with clear blue skies and warm weather. In fact a very fine and historic day as a new UK record temperature of 20.3 degrees for a February day was set in Ceredigion. It felt like we had been on a mid summer ramble, yet officially it was still winter!

Before heading back we took the opportunity for an essential alcoholic beverage at a local pub. On a late winter hike you’d expect to seek out a pub with a roaring fire and a hot meal.

Not today though, as we enjoyed a refreshing cider outside on the sunny riverside at The Ferry Inn, St. Dogmael’s. As the pub sign states its just as well muddy boots are welcome!

This walk from the Gwbert Hotel to the marker point at St.Dogmael’s was a distance of 6 miles in total. 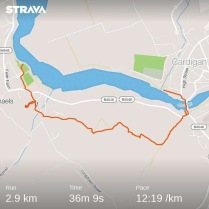