After the stunning scenery of the South Pembrokeshire coastline it was a little difficult to be enthused about the next stages of the coast path between Angle Bay and Cleddau Bridge.

In the maritime heyday of tall sailing ships the natural deep waterway of Milford Haven was renowned for its scenic beauty and famously described by Lord Nelson as the ‘greatest natural harbour in the world’. However the safe accessibility for ships meant the 20th century and the age of the ‘super tanker’ brought massive industrialisation with oil refineries, gas terminals and power stations which now dominate this area on both sides of the Haven.

Unfortunately such development has spoiled the natural environment and some guidebooks even suggest to those not concerned with completing the whole coast path to skip the sections alongside the Haven waterway.

For us it’s all part of completing the trail and we decided to break up the 15 miles distance from Angle Bay to Cleddau Bridge into stages. This first stage was completed as a circular walk from the eastern side of Angle Bay following the coast path as far as Pwllcrochan and returning via countryside lanes.

Starting out from Angle Bay the path joins an access road and soon passes near a huge oil refinery which dwarfs some old farmhouses which are in its shadow. 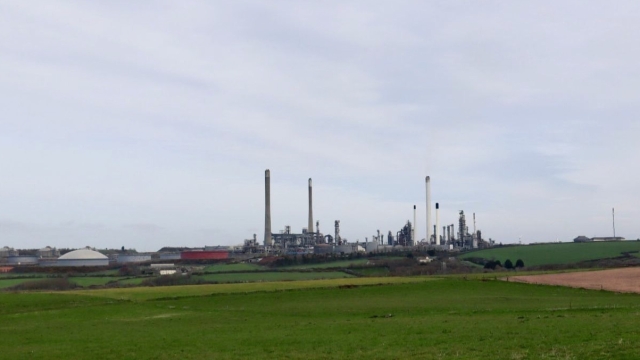 Further along is a historical Palmerston era military fort.  Popton Fort was constructed between 1859 – 1864 and has an imposing position overlooking the estuary. It’s now owned by the oil refinery company and the site is off limits so the coast path leads inland around the outside security fence along the site boundary.

At the back of Popton Fort the path leads across countryside. There is a surprisingly pleasant walk through an ancient woodland with some old ivy covered ruins and masses of bluebells, wildflowers and butterflies above a small inlet known as Bulwell Bay. It seemed idyllic and for a time it was possible to forget the nearby heavy industry.

The path follows the lower boundary fence of the refinery near the waterway and you pass below the huge pipelines connecting to extensive jetties and tankers.

Walking uphill and across farm fields provides views across the Haven shipping lanes before the path heads inland and reaching the picturesque St. Mary’s Church at Pwllcrochan.

The church dates from 1342 and in this beautiful setting it was once at the heart of a thriving rural community. The village has long been abandoned and left in ruins due to being in the shadow of the massive oil industry in recent decades. As a result the church has been closed for many years and is now managed by the neighbouring oil company. They have made efforts to preserve the church and there is a nature conservation area with boardwalks through marshland accessed from the churchyard.

The return walk from here followed the road up to Wallaston Cross and then along country lanes and some wonderful Pembrokeshire farm land eventually leading back down to Angle Bay.

This circular short walk of just under 7 miles completes the section of coast path which is within the National Park in South Pembrokeshire. We completed this walk on 3rd May and this brought the distance we have covered on the Pembrokeshire coast Path to 49 miles.