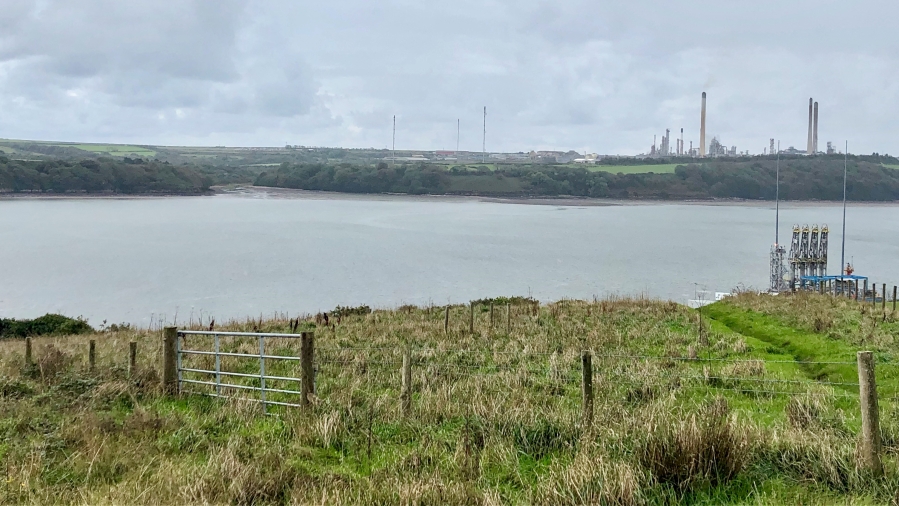 Our next walk on the Pembrokeshire coast path was from Pembroke to Milford Haven, which we completed in 2 stages. The first stage a ‘bridge to bridge’ 4 miles walk from Pembroke’s ancient stone arch Mill Bridge to the modern Cleddau Bridge and Burton Ferry, followed by an 8 mile afternoon ramble to Milford Haven.

With a start point in Pembroke town it is worthwhile, especially if staying locally, to take the opportunity to walk the Town Trail  which highlights points of interest and history of the town.

We set off from where Walk 13 ended at the Mill Bridge and scenic millponds on the North Quay passing The Corn Store and Quayside Cafe.  The pathway around the Castle millpond provides a grand view of Pembroke Castle, a favourite vantage point for artists through the ages. 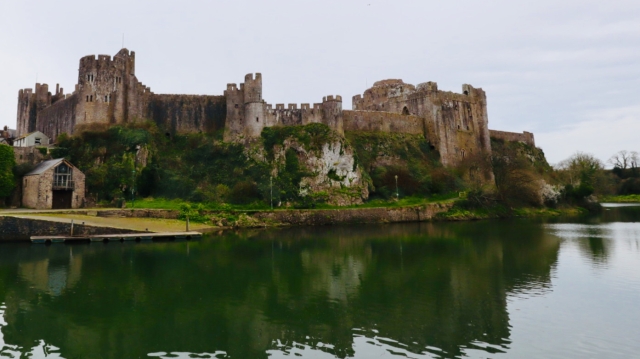 The path then goes through a modern housing development but soon we are on a winding track through a pleasant woodland. At the end of the woods is a muddy stream where some deft footwork is required across stepping stones before steps lead to farmland and across fields.

Reaching Pembroke Dock it’s a walk through residential streets, passing the substantial walls of the former Royal Naval Dockyard and reaching the waterfront where there’s a historic landmark Martello Gun Tower. This structure is one of a number of  coastal forts and defences dotted along the Milford Haven and South Pembrokeshire coast. These were built in the mid 19th Century in response to a supposed threat of invasion by the French but now are historical relics giving a glimpse into Britains military past.

Once past the waterfront the route, unfortunately, is then the most uninteresting to date – a mile or so through urban roads and residential streets until reaching the Cleddau Bridge.

It’s not everyday you get the chance to walk 800 metres across a modern high span bridge and it was a very blustery experience, on a cold grey day which obscured the panoramic views down the Cleddau estuary. At the end of the bridge, instead of carrying on the coast path route we took a short detour turning right and down the road to Burton Ferry near the Jolly Sailor pub at the waterside. Burton Ferry is the historical crossing point of the Cleddau and there remains an unusual Victorian era Trinity House timber jetty. The jetty served as the storage and supply depot for many lighthouses along the Welsh coast and is now a listed historic structure.

After this detour and a break here, we returned to the main road at Cleddau Bridge to continue on the coast path route to Milford Haven. We crossed another bridge with views over Neyland marina and then followed the path across wooded countryside slopes. 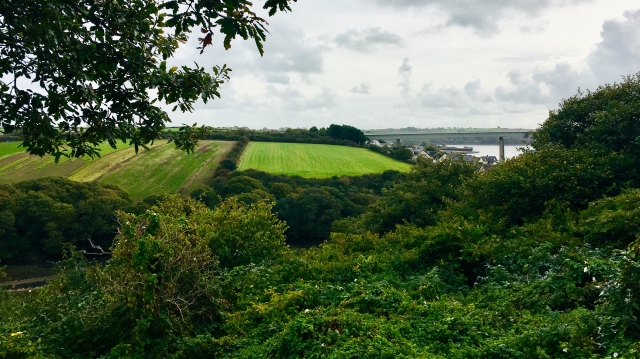 Reaching Neyland at Brunel Quay is a park overlooking a pleasant waterfront. There’s a statue of Isambard Kingdom Brunel the famous engineer who brought the Great Western Railway to Pembrokeshire which led to the rapid development of Neyland in the 1850’s. 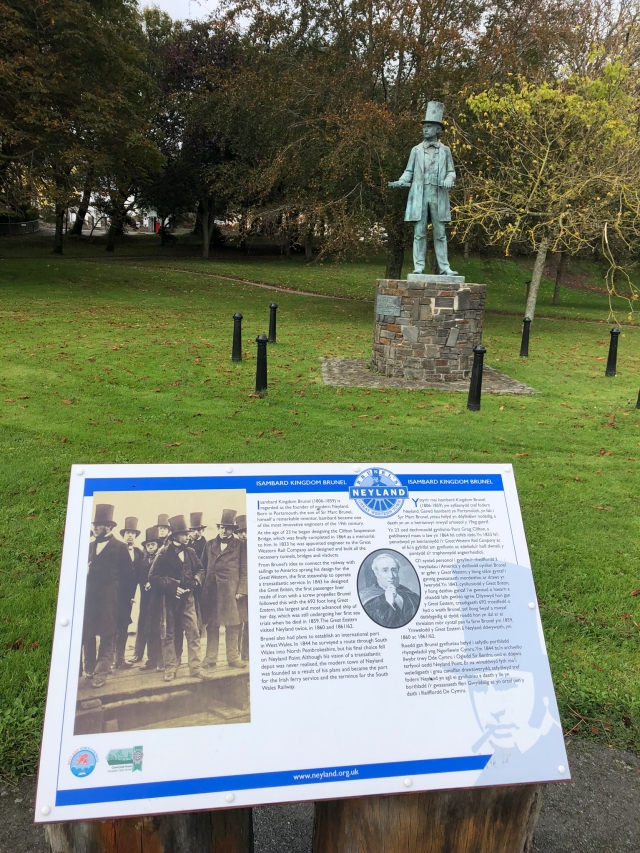 The path out of Neyland is alongside the shoreline of the tidal estuary, though at low tide with mud banks it wasn’t the most appealing scenery on an overcast day.

But we were soon heading along country lanes lined with quaint, character cottages and an old church at Llanstadwell until reaching Hazelbeach and the The Ferry House Inn . This ‘walkers welcome’ pub is ideally situated right on the coast path route and perfect for a lunch break, with riverside views of the Cleddau waterway.

After enjoying a lunch of toasted sarnies and a pint at the Ferry House, we headed on along the countryside around the boundary fences of the liquid gas industrial sites. There are also some huge wind turbines, the sounds of the rhythmic hum and swoosh of the rotating blades overhead. Along the path are 2 steel walkways which cross over pipelines leading from jetties. Although considered by some as quite ugly ‘blots on the landscape’ the contrasts of red metal and steel chainlink against the background of grey skies provide a good ‘leading lines’ photo scene.

At times it seems that industry looms large and then again where you barely notice it’s presence as you walk across countryside fields and tracks through sheltered wooded glades which have some effective screening. Looking across to the opposite side of the waterway, provided a sense of satisfaction and spring in the step knowing we had previously walked that entire stretch of the countryside in our sights.

We walked across fields to Venn Farm and then followed an alternative route for the Pembrokeshire coast national trail to a gated lane near to fields hosting an eco camp site and beehives, no doubt producing some lovely Pembrokeshire honey. As we reached the river inlet at Castle Pill, we lost sight of a clear pathway as the area was very overgrown. Just as we were wondering about the line of the path, a gent from a nearby cottage shouted over to us  ‘are you looking for the path?’. He directed us through a small gap in some overgrown vegetation to which our initial response was “we have to walk through there!” as it looked impassable. But he gave some good advice that once through the overgrowth the path would open up, but we should then climb onto a narrow strip of high riverbank and walk above the path towards the Black Bridge. We soon found he had given us very sound advice as the path below was a flooded bog and impossible to walk along. So we were very thankful for the local’s helpful advice.

From Black Bridge we walked uphill along a notorious stretch of highway with cars hurtling past at speed then crossed to the other side of Castle Pill and we were soon heading into Milford Haven and along the promenade known as The Rath.

It’s a nice welcome point to the town with green open space, landscaped gardens with views overlooking the waterway.

There’s a prominent bronze statue of a fisherman hauling in a net, in honour of the trawler men of the town when this was a major fishing port, engraved with  “Thanks to them Milford Haven flourished”.

Milford Haven has an interesting history. In 1792 the first of seven Quaker families, whalers from Nantucket fleeing from the American War of Independence, were encouraged to settle in the area by Sir William Hamilton, who was granted permission in 1790 to develop a new town. They established a whale oil industry in the new harbour, supplying the City of London with oil for street lamps in the 19th Century.

We took a stroll along Hamilton Terrace down to the marina and ended our walk as tradition dictates at a waterfront cafe with the usual reward of coffee, tea and generous slice of cake. A benefit of finishing a walk at a town is the availability of bus services, so we were able to jump on a bus to return to Pembroke. It was an interesting journey as the bus travelled down winding country lanes and manoeuvred a few very narrow sections.

After originally having doubts about walking each side of the Milford Haven waterway due to the generally unfavourable reviews in some guides, we are glad we went ahead and walked the whole stretch, experiencing a different side of Pembrokeshire. Even though some parts are heavily industrialised when walking around the boundaries of these sites it can seem at times like a walk through countryside. In parts the industry is well screened by clever positioning of the path trail, as shown on this Strava tracking app record of our walk.

The last two walks though outside of the National Park area, had interesting aspects of nature, industry and history along the way. This walk of 2 parts about 12 miles distance brings our total now completed on Pembrokeshire’s Coast Path trail to 68 miles. Only 118 miles to go!

One thought on “Pembrokeshire Coast Walk 14. Pembroke to Milford Haven”