This coast path walk in South Pembrokeshire started at Manorbier beach car park, to Lydstep Haven with a visit included to the secluded bay of Church Doors at Skrinkle Haven on the return walk.

At Manorbier we set off from the car park down the sandy track leading to the wide scenic beach. The track follows a freshwater stream flowing across a bed of pebbles as it meanders it’s way to the sea. It’s a very picturesque setting here, with the backdrop of Manorbier’s imposing Norman castle on a hillside and headlands which flank both sides of the bay. 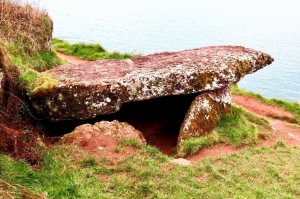 From the beach the path climbs above the cliffs and when it levels out, there’s an impressive ancient burial capstone, known as a “kings Quoit”, right alongside the path.

The track follows the contour of the hillside high above the cliffs and there’s a fine view across the lovely wide Manorbier Bay and the colourful rocks opposite. The track climbs the headland known as ‘Priests Nose’ and more outstanding views from here looking westwards towards Barafundle Bay and Stackpole Head.

The path turns eastwards here and continues high above the cliffs and there are sections which require a head for heights as you walk above some deep sided inlets with very steep drops to the sea. It’s impressive hiking as you follow the track upwards and inland before a steep descent into a valley and then a climb back towards the coast and high ground. The views from the path on gorse covered hillsides are of spectacular cliff scenery as huge red sandstone rock formations contrast markedly below the greenery of the slopes. It was quite a scene here with lots of birds and gulls on the rocks below and their calls echoed through the valley. As the path winds around the coastline it’s an exhilarating walk with outstanding views of the secluded but wide expanse of Presipe Beach and the backdrop of huge, steep and dramatically ridged cliffs. It’s possible to go down a long set of steps to access the beach but we decided against and continued on the coast path route.

Reaching the boundary of a MOD facility means a walk inland across fields before heading back towards the coast and the wonderfully named Skrinkle Haven. Steps lead down to Church Doors but we decided to press on at this point and to stop here and go down to the bay on the return walk.

The path turns and follows along the cliff tops towards Lydstep Point and there’s a vantage point worth pausing at, to take in a wonderful view of Skrinkle Haven.

Towards Lydstep there’s a super section as the track winds down a grassy cliffside (as the photo below) deep into the base of a valley inlet and then climbs via a steep set of 126 steps back up to high ground. Reaching the top I stopped here to take the photo of the track which meanders into the valley, but in reality it was a welcome chance of a much needed break to catch our breaths!

Just a bit further on is a fantastic viewpoint that gives stunning views of the coastline and the dramatic contours of cliff scenery below the section we had previously walked. This is one of my favourite viewpoints of the coastline so far and the autumn sunshine certainly helped to highlight all the colours in the landscape.

Overlooking the wonderful coastal scenery with numerous rock caverns, dramatic rocks and cliffs and the turquoise clear waters calmly lapping around the rocks.

We then followed a path around Lydstep Point and headed down a sloping and slippery track through woodland to reach Lydstep Haven. An access road with a few benches on a raised verge, provide a good spot to take a break with fine views of the cliffs which flank each side of the bay.

On the return walk we retraced our steps along the coast path to Skrinkle Haven and the bay known as Church Doors.

Stone steps followed by 3 flights of a metal stairwell lead down onto a rocky and boulder strewn bay.

It takes some care to step our way across the bay with some footsure rock hopping.

But we made it without incident to the narrow band of sandy beach, no mean feat as the photo below gives an indication of the challenge to get that point!

It’s definitely worth the effort though as getting as close as possible you’re able to fully appreciate the impressive scale and natural beauty of this huge rock archway. Stepping our way across the boulders to the opposite side of the cove, we found the ‘secret’ passage in the rock face which gives access through to the adjoining secluded beach. Caroline actually ventured through to the other side, reappearing at the end of the beach by clambering over the rocks at the shore.

We then made our way back up the 140 steps to the top from where it’s a short walk to the Manorbier YHA Centre nearby. It has a cafe with seating both inside and outside and good washroom facilities too. When open it’s an ideal place to take a short break. We refuelled here with drinks and cake before returning on the coast path to Manorbier.

This nine mile walk was by far our most enjoyable so far. The varied coastal cliff scenery and spectacular rock features are outstanding and made for an exhilarating walk experience. With this section completed we have covered 17 miles on the Pembrokeshire Coast Path.